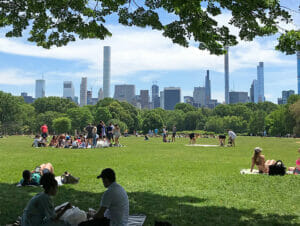 Finding filming locations in New York is sometimes not so easy, as many films and TV series are produced in studios. It looks as if the films are set in New York City, but often backdrops are used. Nevertheless, there are some typical New York films and series whose settings can clearly be located in the Big Apple. Below you find an overview of the most famous filming locations!

If there’s one restaurant in New York that you instantly recognise from a film, it’s almost certainly Katz’s Delicatessen on the Lower East Side. That doesn’t ring a bell? Maybe you know the famous restaurant scene in the film “When Harry met Sally”, which went down in cinematic history. If you want to order the famous “I’ll have what she’s having” but you don’t dare, just have a pastrami sandwich. By the way, above the said table where Meg Ryan and Billy Crystal sat, there’s also a matching sign.

There’s also the famous building with the address 14 North Moore Street in TriBeCa. This refers to the Hook & Ladder Company 8’s firehouse, which is the headquarters of the Ghostbusters in the 1984 film. Visitors have flocked to the Ghostbusters firehouse ever since. The same applies to the Flatiron Building, which is the headquarters of the Daily Bugle newspaper in “Spider-Man” or the Brooklyn Battery Tunnel Ventilation Building, the office of the “Men In Black”. If you’re a fan of Marvel and DC Comics, the Superheroes Tour in New York is a must to see more locations. 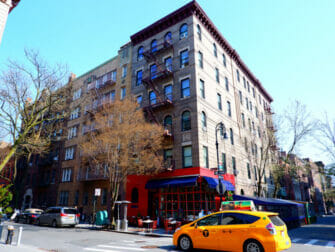 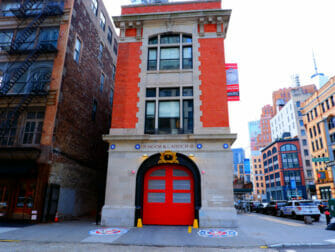 Sometimes a film is set in New York, but other cities have to be used as filming locations. Many scenes in 2019’s “Joker” were actually shot in Newark, New Jersey. However, one particular scene made an average staircase in the Bronx a cult location shortly after the film’s release. You can find the so-called Joker Stairs at 1150 Anderson Avenue.

Of course, a classic film in black and white should not be missing from this list. The fantastic view of the Queensboro Bridge and the East River in the scene from “Manhattan” can still be admired from 58th Street. The bridge lights will shine brightly, but you can also expect the lanterns on the riverbank to shine. They were switched off especially for the film.

While we’re on the topic of classics: the jeweller Tiffany & Co. New York (corner of Fifth Avenue and East 57th Street) is familiar to everyone from “Breakfast at Tiffany’s”. Nowadays you don’t have to eat your breakfast outside like Audrey Hepburn, you can do it more elegantly in the in-house Blue Box Café. If you want to explore more film locations in this style, the classic film tour in New York is a great idea. On this tour, you can learn more about the aforementioned films and discover other exciting film locations in New York.

The Plaza Hotel in the famous Christmas film “Home Alone 2: Lost in New York” is also unforgettable as a film set. Your inner child will probably be disappointed when I tell you that the toy shop “Duncan’s Toy Chest” doesn’t exist in New York, but it’s based in Chicago. However many real New York attractions do make an appearance in the film, such as the Empire Diner, Battery Park, the Gapstow Bridge and Bethesda Terrace as well as Wollman Rink in Central Park and, of course, Rockefeller Center.

If you, like Kevin, would like to experience the magnificent Christmas decorations in December, then I recommend the Dyker Heights Christmas Lights Tour. Here you will see magnificently decorated houses that you usually only see in films and on TV – a true spectacle! 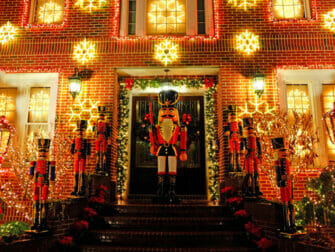 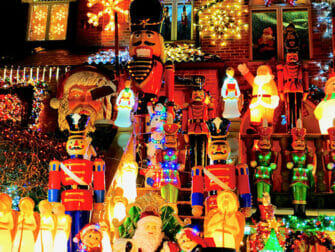 New York as a filming location in TV series also numbers in the hundreds so the Big Apple can be seen on TV almost daily. In “CSI: NY”, detectives hunt down criminals for nine seasons, while in “Brooklyn Nine-Nine” a chaotic group of police officers solve crimes in the city. The series “Mad Men” and “The Marvelous Mrs Maisel”, on the other hand, show New York in the 50s and 60s. Those who prefer a modern view of New York will find many scenes from Manhattan in “Master of None”, including a helicopter tour in the second season.

When you think of New York and TV shows, your first thought is bound to be “Friends” (even though the series was actually filmed in the film studio in Los Angeles!). Unfortunately, the Central Perk Café, where the six Friends met regularly, doesn’t exist in real life. However, the building on the corner of Grove and Bedford Streets in Greenwich Village served as the exterior shot for Monica and Rachel’s flat. Overall, New York does have a bit of “Friends” in it after all! You can also shop at Bloomingdale’s and, if you’re lucky, you’ll run into a Rachel. For those who really want to explore the sets of Friends, there is now The FRIENDS Experience that you can visit

Sex and the City locations in New York

A series in which New York almost plays the leading role is “Sex and the City”. Carrie’s flat (66 Perry Street) attracts so many visitors every year that the owners have already put up a barrier on the stairs. If you want to immerse yourself in the world of Carrie, Miranda, Samantha and Charlotte, the Sex and the City Tour is one of the best options.

How I Met Your Mother in New York

Similar to “Friends”, “How I Met Your Mother” revolves around a circle of friends who live in New York. Ted’s flat is on the corner of Amsterdam Avenue & W 75th Street. But don’t expect to find McLaren’s Pub there. Unfortunately, it doesn’t exist. The good news is that you can visit McGee’s Pub (250 West 55th Street), the inspiration for the favourite bar in the series. True fans should also pay a visit to Gray’s Papaya (2090 Broadway), where Ted and Robin celebrated New Year’s Eve and the hot dogs are really delicious!

Another New York series in which NYC serves as a primary location is the teen drama “Gossip Girl”. It follows the lives of privileged teenagers on the Upper East Side. In this case, the film sets are just as high-profile as the jewellery worn by Serena and Blair: starting with the first scene in Grand Central Terminal, through the stairs of the Met Museum to the Empire State Building. Discover more Gossip Girl film locations in New York on the Gossip Girl Tour. 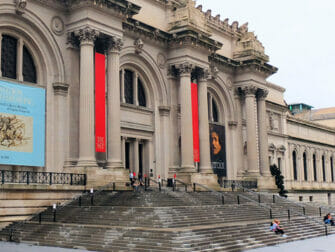 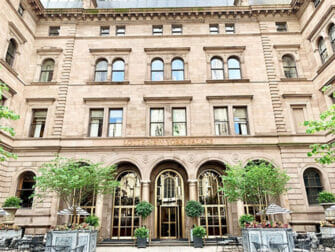 When you think of a film or series set in New York, you’re bound to think of more examples straight away. New York is definitely one of the most featured cities in film and television! Check out the list below for some more backdrops that you shouldn’t miss if you’re a film or series fan.

The Brooklyn Bridge is one of the landmarks of the Big Apple so it’s often used as a New York film set. In most cases, the bridge is not only the setting for a film but also has a certain significance for the romantic story in the film or series. For example, in the film “Sex and the City” Miranda meets Steve on the Brooklyn Bridge as a sign of the new beginning of their relationship. In “Enchanted”, Prince Edward, equipped with all kinds of New York fan articles, tries to win back his beloved Giselle there, and in “Kate & Leopold”, the Brooklyn Bridge is even the connecting element between past and present. 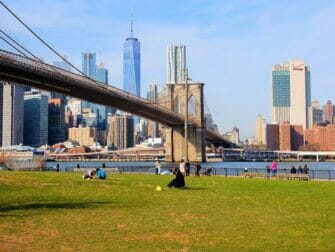 Central Park appears in countless film productions, so you could make an incredibly long list of films and series set in New York! In “Die Hard: With a Vengence” a taxi is driven through the park recklessly by John McClane and Zeus, while in “Home Alone 2: Lost in New York” the park is a refuge for Kevin several times. In “Avengers” the superheroes gather at Bethesda Terrace and in the film “New York, I love you” Central Park is of course also a must as a filming location. If you would like to learn more about the locations in Central Park, I can recommend the Central Park Movie Sites Walking Tour. 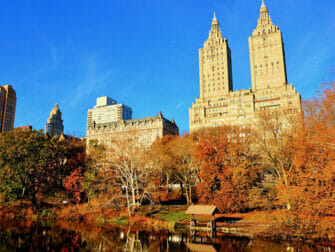 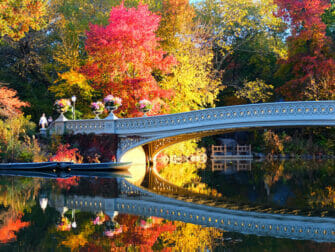 Grand Central Terminal is also a popular film location. The impressive architecture and the large flag make the building an eye-catcher that is often used as a film background. No wonder, then, that New York’s largest train station has made so many film appearances, such as in “Eternal Sunshine of the Spotless Mind”, “Superman”, “Girl on the Train”, “North by Northwest” and “21 Bridges”.

In a list of famous New York filming locations, the Empire State Building, an icon of the Big Apple, must of course not be missing. Already in 1933, the probably most famous skyscraper in New York was the secret star of the film “King Kong”. In the 2005 remake, the giant ape climbs up the building. The Empire State Building is also famous for the final scene in “Sleepless in Seattle”, and in the Christmas film “Elf”, the title character seeks out his father there.

The American Museum of Natural History is not only the workplace of palaeontologist Ross in “Friends”, but it has also made an appearance in “How I Met Your Mother” as the venue for a fundraising gala. Barney claims here that he pulled the museum’s famous blue whale from the ceiling as a child. Furthermore, the museum was a backdrop in “Men in Black 2”, “The Devil Wears Prada” and “One Fine Day”. Not to be forgotten: The film “Night at the Museum” with Ben Stiller also about the museum and its exhibits.

Even if the Public Library is not on top of every New York visitor’s list, film and series fans should definitely plan a visit here. New York’s library is just as famous in film history as the city’s main attractions. “The Ghostbusters” went ghost hunting here, Carrie wants to get married there in “Sex and The City” and in “The Day After Tomorrow” the public library serves as the last refuge in an icy world. 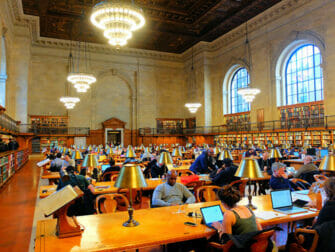 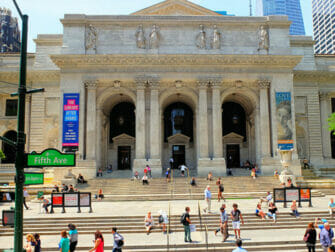 Where is filming currently taking place in New York?

As a film or TV series fan, there is nothing better than experiencing filming live in New York – and the chances of witnessing it aren’t impossible. There is almost always a film or series being shot somewhere in New York! If a street is closed off, for example, it’s pretty certain that the camera is rolling there.

With a little luck, you’ll be able to catch a scene or two during your stay – or if you’re determined, you can plan ahead and check the internet for current filming locations in New York. If you want to learn more about films in New York, you should definitely take the New York TV and Movie Sites Tour! There you can see many original locations in New York and who knows, you might even see a film being shot live in New York. 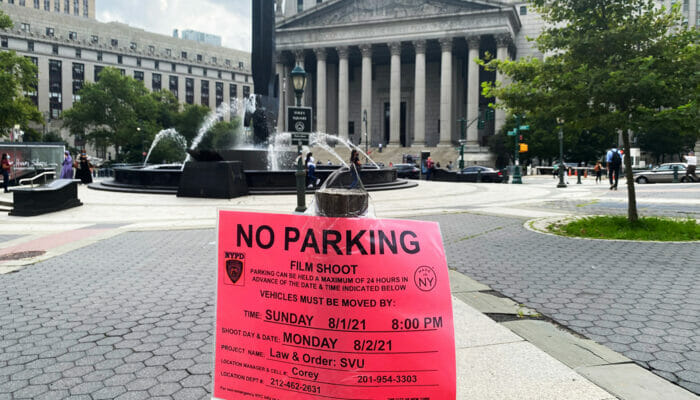 What films have been shot in New York?

The number of films set and shot in New York is incredibly large. You can find a selection of films here.

Where is filming currently taking place in New York?

There is almost always a film being shot somewhere in New York, so it is only a matter of time before you discover a location. You can find more information here.

In which hotel was “Home Alone 2: Lost in New York” filmed?

Many famous places in New York make an appearance in the film "Home Alone 2: Lost in New York", including the Plaza Hotel.