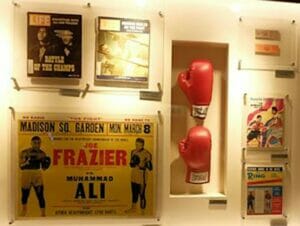 Boxing in New York tickets can easily be purchased online, before travelling to New York. Madison Square Garden, also known as ‘The World’s Most Famous Arena’, is the place where famous heavyweights fought their matches. Over fifty fights for world titles were held in The Garden, including ‘The Battle Of The Century’: Joe Frazier vs. Muhammad Ali in 1971. Frazier was the champion. Madison Square Garden isn’t the only place in New York where you can watch boxing matches. Barclays Center in Brooklyn also hosts competitions such as the Premier Boxing Champions matches.

During the 1940s and 1950s important fights were held in Madison Square Garden. Henry Armstrong and Joe Louis competed in numerous competitions and Louis defended his title here as much as eight times. Even after announcing his retirement, Louis decided to fight against Rocky Marciano in 1952. Unfortunately he was defeated. The classic Sugar Ray Robinson vs. Jake Lamotta, won by Robinson, also took place in The Garden.

Do you want to go to matches where legends are born? Then you should definitely buy tickets for boxing in New York. You can go to a real ‘fight night’ in Madison Square Garden to watch boxing champions.

Buy tickets for Boxing in New York by taking a look at the table below and selecting the date you would like to go to a match. It’s possible to pay for the tickets by credit card or PayPal. The tickets are mobile e-tickets that you can show on your phone to enter the stadium. You don’t need to print these mobile tickets. You are guaranteed to receive real tickets and they will always be delivered on time.

See below the list of dates and book directly

If there are no tickets available, you could consider going to a WWE wrestling game in New York.