Flying to New York from Australia 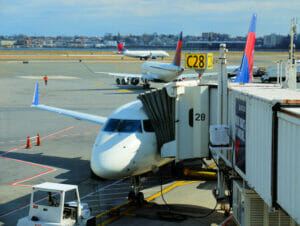 Flying to New York from Australia doesn’t have to be very expensive. If you book on time and avoid travelling during busier months then you can find return tickets from around A$1,500. I recommend trying and book at least 4-6 months in advance. If not, at least 6 weeks before you leave. Flexibility is also a key to save money on flights. As a tip, it’s usually cheaper to fly on Monday rather than Sunday, Thursday rather than Friday, early morning, and midweek. The average flight time from Sydney to New York is around 20 hours plus stopover. However, sometimes other factors such as wind and weather conditions could make the flight longer.

A lot of carriers offer flights from Australia to New York but check with your local airport for specific information. Sydney, Melbourne, Brisbane, Perth, and Adelaide airports offer flights to New York with stopovers in Los Angeles, Dallas, Vancouver, Abu Dhabi, Guangzhou, and many more.

New York doesn’t necessarily have a ‘high season’ as such, but the holiday season including Thanksgiving, Christmas and New Year’s Eve (late November and all of December) are certainly a lot busier. January and February could be considered the ‘low season’ as New York is a little less crowded due to the freezing temperatures. March and October are the best months to book considering the price and the temperatures in New York. Here you find a list of holidays that are celebrated in New York and see here for tips on when to best travel to New York.

Eric’s Tip: I always try and book my flight as early as possible. With booking sites such as Expedia it saves you time because you can book only the flight or flight and accommodation all on one site. Also if you want to fly with a specific airline to gain or use mileage, it’s good to check the airline sites because they might have campaigns.

Tips for booking flights to New York –  Keep an eye on the various available deals. If you are not in a hurry to book, recheck the various flights over a period of two weeks.

Search, compare and book your flight tickets to New York on BudgetAir.com.au! Use the filters during the search process and you’ll find the best flight deals to New York and 9000+ other destinations worldwide. Need help? Then contact the customer service that’s available 7 days a week.