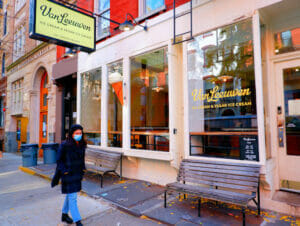 Vegan restaurants in New York are increasing in number and popularity like in many other cities across the globe. The health-conscious New Yorkers were naturally quick to jump on the plant-based trend, and vegan food is now possible to find all over the Big Apple! Many New York restaurants offer vegan courses, often clearly labelled on the menu, or have some dishes that can be modified to suit your diet on request. You’ll also find many 100% vegan restaurants in New York, and I’ve listed the ones not to miss in this post.

The dining options are nearly endless with the many restaurants in New York! Whether you’re on the lookout for veganised American classics, such as pizza and mac n cheese, or high-end dining, then there’s a vegan restaurant in New York for you! Here I’ve selected a broad range of restaurants to suit any taste and budget.

Located in the Theater District, P.S. Kitchen is an ideal place to enjoy dinner before watching a Broadway Show. The vegan restaurant offers both a great atmosphere and tasty food sure to impress non-vegans too. The menu is quite classic with dishes like burgers, lasagna and Caesar salad, so most can find something to their liking here. They also serve vegan cocktails (and mocktails)! P.S. Kitchen is a social business, committed to creating jobs for those marginalised in New York and donating 100% of it’s profit to sustainable charitable work.

If you’re looking for a vegan alternative to a classic New York diner, look no further! Champs Diner is located in the trendy Williamsburg neighbourhood and offers plant-based versions of typical American comfort food. On the menu, you’ll find breakfast burritos, pancakes, milkshakes, mac n cheese, burgers and many other hearty dishes!

The chain of casual vegan restaurants in New York offers fantastic sushi with creative and tasty flavour combinations. However, they go (far) beyond sushi, as the name also reveals. Dumplings, wraps, tacos, burgers and much more are also on the menu, so there’s truly something for every taste and mood. Beyond Sushi has several locations across Manhattan, for example at Union Square and 37th Street.

Delice & Sarrasin is a small and intimate vegan restaurant located in the heart of West Village. The cosy, bistro-style restaurant has an ambitious menu with a wide range of classic French dishes. They specialise in authentic French courses and crepes, which in plant-based versions bring out the unique flavours of French cuisine. A must for vegan foodies!

Screamer’s Pizzeria has quickly become a firm vegan favourite in New York, and they now operate two pizzerias in Brooklyn (Greenpoint and Crown Heights). They’re 100% vegan and offer pizza by the slice and whole pizzas at reasonable prices. You have plenty of toppings to choose from: everything from vegan ricotta and mozzarella to chorizo and pepperoni. What more could a pizza lover want? The only downside is that both pizzerias only have a few tables and tend to be busy.

Located in East Village, Avant Garden is one of the few fully vegan restaurants in New York offering fine dining, and it’s a great place to celebrate a special occasion. Serving tasty contemporary cuisine, this upscale restaurant is sure to impress even those sceptical of vegan food. The menu consists of seasonal, veggie-centric dishes with rich flavours. Avant Garden is a small and popular restaurant, so make a reservation in advance.

It’s not only the vegan and vegetarian restaurants in New York that tempt with tasty plant-based food. The city offers many possibilities for enjoying a delicious vegan snack or coffee break too.

Are you looking for a sweet treat? Then make sure you pay a visit to one of the Van Leeuwen Ice Cream shops. The company was founded in Brooklyn in 2008 and quickly became very popular. Today you’ll find Van Leeuwen Ice Cream parlours all across New York City. Although they sell dairy, they offer many vegan ice cream flavours too. You’ll find both classic and more creative, seasonal flavours as well as vegan toppings. You can also opt for a vegan sundae, ice cream sandwich or milkshake. The menu lists the many vegan options, so deciding which mouthwatering treat to buy might prove the biggest problem.

As the name indicates, this is a fully vegan bakery, located in the charming and vegan-friendly neighbourhood of Greenpoint, Brooklyn. It’s a great place to have a coffee break with a sweet treat or to have lunch. Happy Zoe Vegan Bakery serves so many different sweet and savoury snacks – cakes, muffins, cookies, donuts, sandwiches, burgers and much more – so you’re truly spoilt for choice here!

The Vegan Food Tour in East Village is a great way to explore the sights and culinary delights of the cosy Manhattan neighbourhood. On this 2-mile walking tour, the guide will take you through the East Village and tell you about the area’s rich history. Along the way, you’ll sample at least five different vegan foods, both savoury and sweet. The food stops vary from tour to tour, but samples may include anything from burgers and sushi to cheese, chocolate and ice cream – all vegan of course. And who knows? Maybe you’ll find your new favourite vegan place in New York on this tour!