The Ride in New York 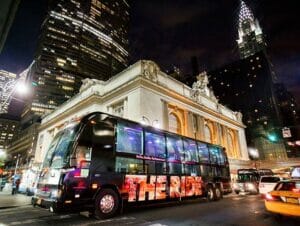 The Ride in New York City is truly a unique experience. The Ride is not your average sightseeing tour. The technologically advanced bus takes you around Manhattan in an interactive tour. The Ride celebrates the eclectic mix of people that make New York City complex, interesting, and unpredictable!

Book tickets for The Ride here

The Ride through New York City

The Ride allows visitors to experience New York City in a special way. Its popular with locals and tourists alike. This show-tour is interactive and offers improv comedy, Broadway songs / performances and interesting facts about the city. It’s a great addition to your New York trip. The Ride is a bit different to the Hop on Hop off buses as The Ride is for people that want to have quick tour of the city as well as a bit of entertainment. The bus will take you around the city in a 6.8km loop and you can take photos of some of the biggest attractions of the city through the panoramic windows.

The 75-minute long Ride in a technically advanced bus that seats 49 people, has 40 plasma screen tv’s and over 3,000 LED lights. Most importantly the huge panoramic windows make the sides and roof of the bus transparent and allow for excellent views over the streets of New York. In addition the bus has three rows of stadium-like seats mounted sideways like a portable theatre. There are no bad seats available on the bus! The Ride also has a personality of its own and interacts with the comedic hosts during the tour of the city. It is great to watch your own surprised reactions and those on the street. But that is the charm of the streets of New York: strange stuff is not that unexpected. 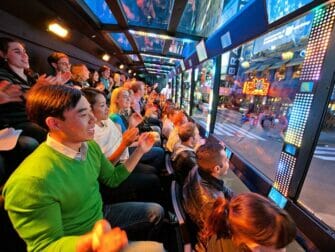 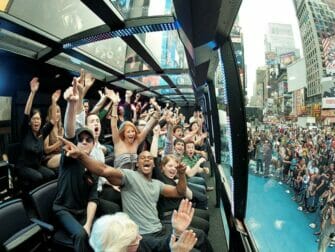 What can you expect from the Ride?

Once you are on the bus you will first meet your hosts Scott and Jackie! As The Ride starts touring, you’ll be introduced to everybody on the streets. Some of these people will be actors who are part of the show. Some of them will simply be regular people on the street. As a group you’ll interact with them by surprise them with the wave or singing along to “New York, New York.” Essentially, it’s a two-way show!

At the same time you will be touring past some of New Yorks best sights such as Empire State Building, Grand Central Station, Central Park, the Chrysler Building and Times Square. You will also be quizzed on your New York knowledge. So come prepared because anything is possible!

After purchasing you will receive a voucher that you can print and exchange for a ticket, or show as a mobile voucher on your phone.

Book tickets for The Ride here 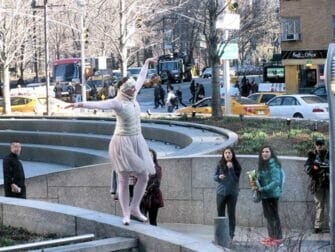 Is The Ride sold out on the day you would like to go? Then The Tour is a good alternative, that’s also a bit cheaper. The Tour is similar to The Ride, on the same bus, but without the street performances. The Tour is still a fun experience though, with an entertaining tour guide, sightseeing and an interactive bus that makes comments and tells jokes. If you have a New York Explorer Pass, The Tour is one of the options and you can even reserve a spot in advance.

Book your tickets for The Tour here

The Downtown Experience, powered by The Ride is the newest tour from the creators of The Ride. This tour has the added experience of Virtual Reality. The well-known bus, used in The Ride tour: with sideways facing seats, drives through Downtown Manhattan for this 90-minute tour. The guide will tell you all about the history of the area and the many famous monuments. Along the way, you’ll see street performances, further enhanced by realistic historical images, through the use of a virtual reality headset.

Book your tickets for The Downtown Experience here 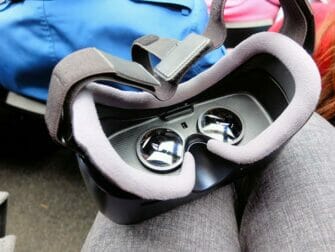 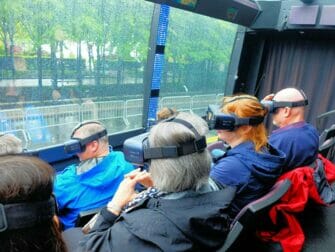