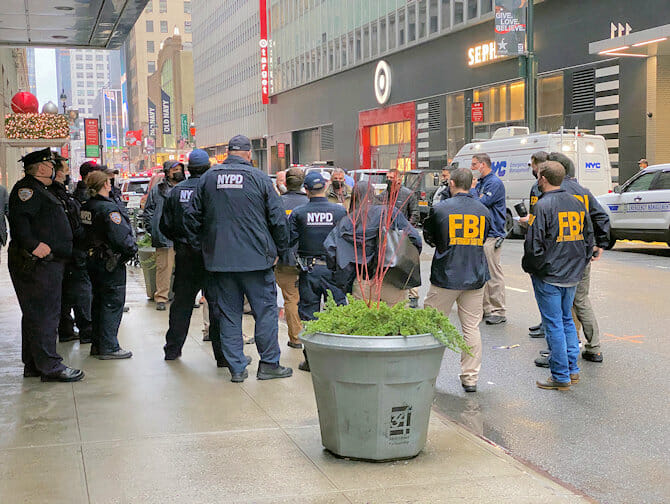 The safety in New York is not something you have to worry about, as it’s considered the safest city in the United States. In the ranking of the cities with the highest crime rate worldwide, New York is not even among the top 200 cities. Naturally, you should still be careful. The crime rate in New York has dropped dramatically in recent years and crimes against tourists are rare. However, keep a close eye on your valuables in busy places. For keeping safe in New York, I recommend following the tips below.

Travel safely as a tourist in New York

I get the question often whether New York is safe, whether you can explore New York alone as a woman and which things you should pay attention to in New York. I can quickly answer the first two questions with a loud YES! New York is as safe as large cities in Australia. If you use common sense and follow a few basic rules, then you really don’t need to be afraid.

In all the years that I call New York my home, nothing worth mentioning has really happened to me. Thankfully, I’ve never heard from friends or other New York fans that they’ve been robbed. Please don’t worry too much about this, the main thing is looking forward to your well-deserved vacation in New York!

The police presence may be a bit stronger than in Australia but that doesn’t mean there’s more crime in New York than elsewhere. New York’s bad reputation comes from the 1970s and 1980s when New York City and especially the subway were considered dangerous.

Fortunately, times have changed! Nowadays, New York is the flagship of the United States when it comes to metropolitan security. Keep the following rules in mind so you can focus on sightseeing with ease.

What do you have to consider in New York?

In films and TV series, it looks like New York is a very dangerous city and the police force can quickly give this impression. However, the way the crime rate is depicted is presented in a very exaggerated way. Manhattan is New York‘s safest neighbourhood. Other neighbourhoods such as Queens or Brooklyn can also be visited during the day without hesitation.

However, I don’t recommend walking around Harlem or the Bronx at night but using a taxi instead. I am often asked about places that should not be visited, this can’t really be generalized. Although as a tourist, you shouldn’t necessarily visit the South Bronx, Mott Haven, Hunts Point or Fordham. Brooklyn also has areas that are not quite as inviting, such as Brownsville. In some neighbourhoods, the circumstances may change depending on the block, so be vigilant.

New York City has fewer scams compared to other cities around the world. This means you probably won’t even come into contact with potential scams. However, it’s good to know that there are things you can do to take appropriate precautions.

New York City is generally safe, but there are some things to keep in mind and places to avoid at night. You can see my tips here.

Is New York safe at night?

Yes, it definitely is. However, it’s still good to keep in mind some precautions when you're sightseeing or having a drink at night.

Is The Bronx safe?

The Bronx is still considered by many to be the “dangerous neighbourhood” of New York. Read more here to know which areas you should avoid.

How safe is Manhattan?

Of all the neighbourhoods in New York, Manhattan is the safest place for tourists. With a few basic rules, you can enjoy your vacation in the Big Apple even better.

Brooklyn is an interesting neighbourhood that’s a great contrast to Manhattan. Read more here to know which area you should avoid.