Lower East Side in New York 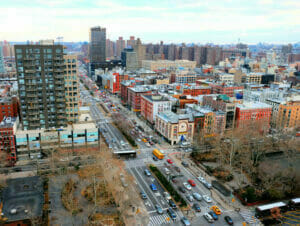 Lower East Side in New York is a neighbourhood in Manhattan, between Lower Manhattan and Brooklyn – between Manhattan Bridge and Williamsburg Bridge. In this area old meets new. Here you can find decades old lower buildings, next to new and very modern high rises. The vibe in the Lower East Side is quite hip & happening eclectic. The charm of this part of town lies in the edgy, artistic character melting with newer, more luxurious hotspots.

Rusty fire escapes and ‘dodgy’ alleys only add to the artsy atmosphere of the Lower East Side. You might feel slightly unsafe from time to time, although I would say that there isn’t need to be. I wouldn’t recommend visiting the area around Williamsburg Bridge at night as a tourist though. Lower East Side is primarily a school-district area, which probably doesn’t sound very attractive, but it does make the area very authentic. For example, there’s the rough Coleman Skatepark below the Manhattan Bridge, quite a contrast to the slick and glassy Midtown skyscrapers. But there are more reasons to make a pit stop here – especially when you’re in town for over four days. Explore the neighbourhood during a long walk, or when taking a break from a bike ride along the East River. Don’t forget that there’s the FDR Drive in between the bike lane and the river. Definitely make a stop at the newly developed Pier 35, where you find four metal porch swings that offer great views of both the Manhattan and Brooklyn skylines.

If you want to grab a quick bite to eat then I suggest going to Russ & Daughters (179 E Houston Street). Russ & Daughters was established in 1914 and has a lot of Eastern European and Jewish products and dishes. The cookies and the bagels (with salmon) are the best, highly recommended. 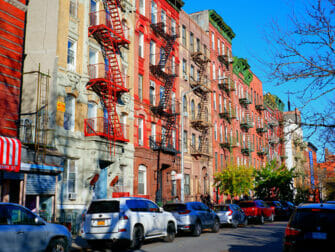 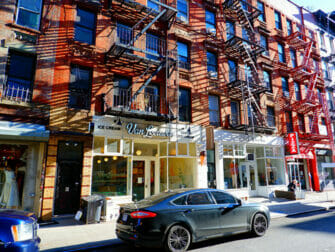 Another way of getting a taste of the Lower East Side culture is to get an actual taste of it: follow a tour guide around this part of town, along all of its food stands. With the Lower East Side Food and Culture Tour you’ll walk around the neighbourhood in a small group, hunting for the best food it has to offer. In Lower East Side, these dishes come from many different cultures. That’s why you won’t be just eating, but you’ll also hear stories about the people that brought those dishes to New York, and about Lower East Side itself. Getting to know a place via your taste buds… does it get any better?

Delancy Street in the Lower East Side is the heart of the neighbourhood. Here you find the authentic New York buildings next to newly built complexes, one of which being Essex Market. The market is a collection of small local businesses who all have their own specialties. Essex Market already exists for over 100 years, but it recently moved to a new, modern building. It’s a great spot to grab a bite during your exploration of the Lower East Side.

In terms of shopping and fashion, Lower East Side is becoming pretty big. More and more upcoming designers, alternative second hand boutiques and other shops pop up in former apartments and houses. These are the kind of shops to browse for hours, finding unique treasures. Bargain fanatics will fall for Orchard Street. Note: a lot of stores are closed here on Saturdays instead of Sundays. This has to do with the Jewish past of Lower East Side. Other Jewish roots are noticeable on the shelves of food stores and on restaurant menu’s within this area.

Hotels in Lower East Side

You simply can’t visit Lower East Side without visiting Katz’s Deli. In this diner, it’s all about being ‘XL’. The space itself, the drinks and the sandwiches (try the pastrami!), everything is huge. This provides you with the ultimate New York feeling: big, bigger, biggest! But to be honest, the main reason why Katz’s Deli is so popular, especially amongst tourists, is a legendary scene from When Harry Met Sally. Indeed, Meg Ryan’s fake orgasm occurred at one of these tables. The sign with ‘Where Harry met Sally…hope you have what she had!’ shows you which table exactly.

Eric’s Tip: Are you interested in the less ‘fashionable’ history of Lower East Side? At 103 Orchard Street you’ll find the Tenement Museum. The tour guide will show you how people used to live here over a century ago: with multiple poor families together – in old, ruinous buildings: the tenements. 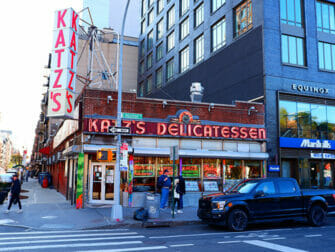 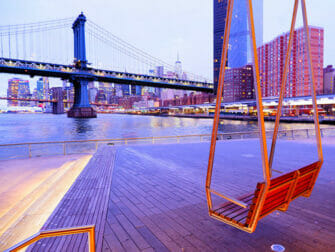