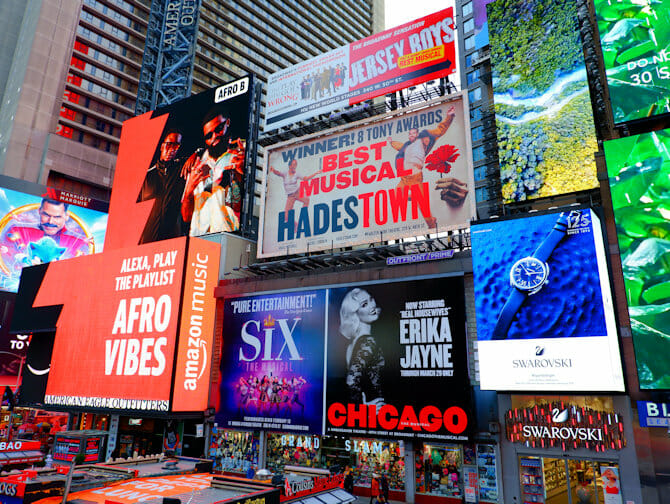 The Theater District in New York is the main hub for entertainment in the city. The district stretches from West 40th Street to West 54th Street and from West 6th Avenue to the east of 8th Avenue. Crossed by Broadway, it spans the iconic Times Square. Undoubtedly, New York’s vibrancy originates from this area. There are approximately 36 theatres crammed into this rather small district.

The Theater District is not known as the heart of Manhattan for nothing. It received this name due to the abundance of theatres. Furthermore, you can find recording studios, record labels, theatre agencies and ABC Television Studios here.

From the ’60s to the ’90s Times Square was considered to be a dangerous neighbourhood due to go-go bars, sex shops, and adult theatres. Yet, in the mid-1990s Mayor Rudolph Giuliani initiated a ‘clean up’ of the area. He closed the seedy places and opened more tourist-friendly attractions. Walt Disney Co had a most noteworthy part to play in the improved image of Times Square. Purchasing the run-down New Amsterdam Theatre, in addition to working on the whole area, stretching from 42nd to 53rd Street and from 6th to 8th Avenue.

Broadway runs right through the Theater District in New York. It is the oldest North to South Road in Manhattan: a whopping 29 km long! The section that runs through the district is known as the Great White Way, home to the bright lights and billboards. There are plenty of Broadway musicals to choose from, meaning there is something for everyone. 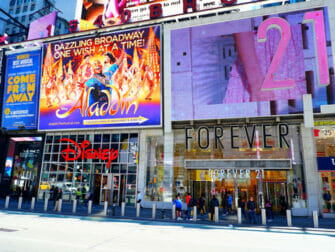 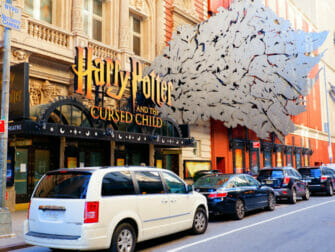 The difference Between Broadway and Off-Broadway

The theatres are divided into two categories: Broadway and Off-Broadway. Don’t take the difference too literally as it actually depends on the kind of theatre and size of the show. Off-Broadway shows accommodate between one and five hundred people. These shows are often more experimental productions. While Broadway shows have larger audiences and are typically blockbusters that run for years. Most relevant are famous musicals like The Lion King, The Phantom of the Opera and Chicago. Almost all forty official theatres are located on and around Broadway. Fun fact: if the show isn’t performed in an official Broadway theatre, it can’t compete for an acclaimed Tony Award!

Seeing the shows is the main appeal to visiting broadway. Although it’s worthwhile just to see the theatres themselves. For example, the Winter Garden Theatre, home to some of the top-grossing shows ever made, was initially built as a horse exchange. It was re-designed as a theatre in 1911. The two oldest functioning theatres in New York are the Lyceum and The New Amsterdam. Both opened their doors in 1903. Furthermore, Lyceum is one of the smallest theatres, despite the fact it has 3 levels! The New Amsterdam, one of the most beautiful, is the flagship for all Disney Theatrical Productions. Currently showing Aladdin, it’s rumoured to be haunted by a woman in a green dress who wanders the stage at night. According to legend, she was a showgirl. If you are interested in learning more about hauntings on Broadway, I suggest you take the Haunted Broadway tour. 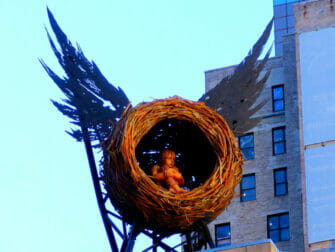 Broadway tours are an interesting way to learn more about the colourful area. Exploring Broadway alone is great, yet, if you are interested in learning the history, about the actors, buildings and their secret spots, I recommend that booking a guided walking tour of Broadway.

Do you want to learn more about the in’s and outs of Broadway? Take this Broadway Theater walking tour. In two hours the guide takes you through the history of Broadway. You visit all the major sites; from statues to souvenir stores and hear all the background stories along the way. In addition, the guide has a tablet full of pictures and videos to help recreate the stories. A must for true Broadway fans!

Maybe off-Broadway is your thing? This two-hour Off-Broadway tour is for true Broadway connoisseurs. If you can sing all the songs from The Lion King, it’s time to do this walking tour. Learn about the origins of Indie theatre, the history of showbiz in New York City and the differences between Broadway, Off-Broadway, Off-Off-Broadway and Indie Theatre. In conclusion, this is Broadway for the advanced!

For true Disney fans, there’s the Disney on Broadway tour. With this tour, learn all there is to know about Disney musicals on Broadway. A guide takes you on a 1.5-hour walking tour of Broadway before entering the New Amsterdam Theater. Here, take a peek behind the scenes and get some backstage gossip on Beauty and the Beast, Aladdin and The Lion King, among others. The tour ends with the cherry on the cake when you get to try on some of the costumes yourself!

In the middle of the Theater District lies Times Square. The popular New York tourist attraction with the red staircase, yellow cabs and bright lights. Times Square is one of the most photographed spots in Manhattan. Consequently, it is often extremely busy and not everyone’s cup of tea. In fact, many New Yorkers will avoid this area completely. It is also the place where famous brands have their flagship stores and you can find most major restaurant and hotel chains. It’s also where I recommend starting the tour with the Hop on Hop off bus as you’ll find the most empty buses. In addition, hidden in Times Square, are little gems you only see with a guide in tow, if you want to get the inside scoop, take this three-hour tour of Times Square. 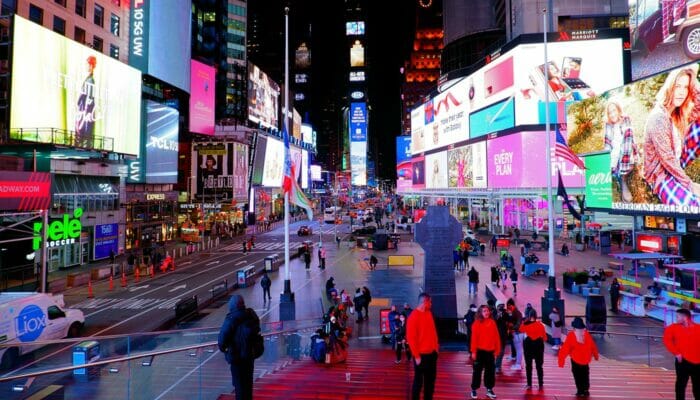