Coney Island is a colourful peninsula with 60,000 inhabitants, situated in south-west Brooklyn. The peninsula is known for its large beach. When visiting Coney Island, you’ll experience the fun fair-like atmosphere that has reigned here ever since it became popular in the twentieth century.

Coney Island is an excellent place to avoid the intense heat you might experience in the city in the summer. Beaches, boulevards and roller coasters are the three main elements that characterise this fun place. You can even go swimming here. If you want to explore Brooklyn and Coney Island, while enjoying stops at a number of great pizza parlours, then I suggest taking the Brooklyn and Coney Island Pizza tour. This is a perfect option to visit the Coney Island beach without the hassle of getting there by subway (which takes about an hour!)

Rides and Attractions at Luna Park

While Coney Island used to be the hangout for the less fortunate, nowadays it’s more like a giant funfair that attracts a varied crowd. Many of the smaller family businesses and amusement parks closed down during the massive renovation of Coney Island that took place a few years ago. Luckily, you’ll still be able to visit some of the most iconic attractions such as the 150-feet Wonder Wheel, the 87-year-old roller-coaster Cyclone, Nathan’s famous hotdog stand and the boulevard with all its kitschy shops. Although the famous amusement park Luna Park kept its original name, it’s been completely renovated. Anyone can access Luna Park for free and walk around, but you need tickets to go on the actual rides in the amusement park.

The only aquarium in New York is located in Coney Island. In the New York Aquarium you can see, among others, penguins, sea lions, walruses, sharks and otters in their various habitats. Go to the Aquatheater to watch sea lions and their trainers perform, and there is a 4D theatre where you can see 3D films with extra sensory effects. The New York Aquarium is not very big, but a nice place to visit with kids after a day on the beach of Coney Island. 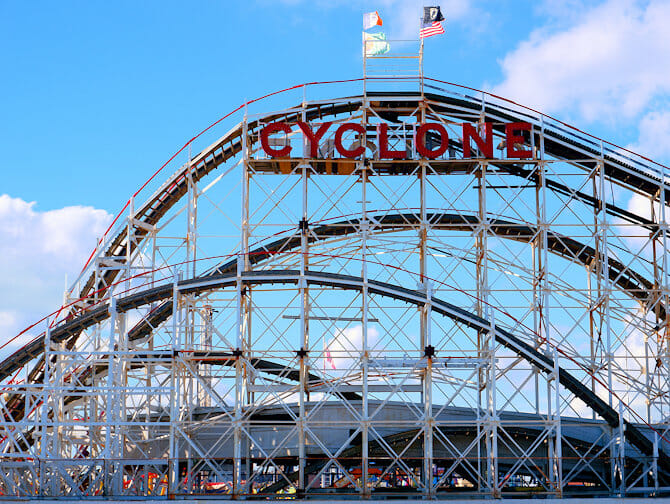 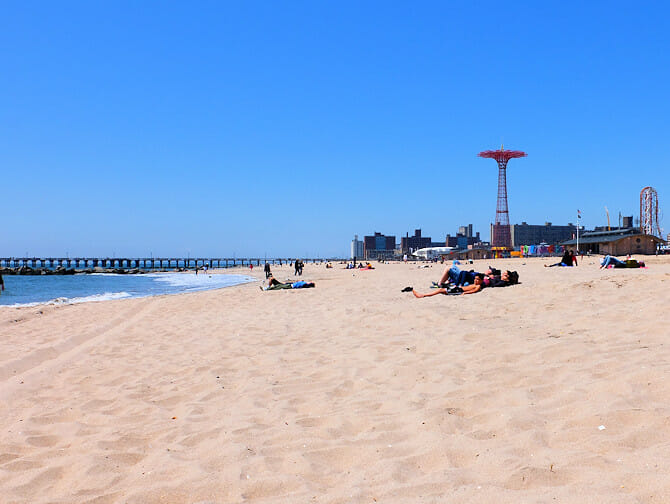 Ever since 1983, Coney Island has had a unique way to mark the beginning of summer by organising an annual Mermaid Parade. What to expect? Exactly that: a parade featuring thousands of people dressed up as mermaids or other sea creatures, and a celebrity merman and mermaid crowned king and queen. Although the parade is a family event, you should know that it’s legal in New York for women to be topless in public and that this parade is known for its partial nudity. The Coney Island Mermaid Parade takes place every year around the first day of summer.

Brighton Beach is also part of Coney Island. When visiting this unique part of the city, you’ll be likely to hear more people talking an Eastern-European language than English. The area is also known as “Little Russia” or “Little Odessa”, named after a Ukrainian city where many of the immigrants that came to Brighton Beach in the 1940’s and 1950’s came from. Because of the large Eastern-European community, you’ll experience another atmosphere than in other parts of New York. That’s probably the reason why many New Yorkers love to spend their holidays here – of course alongside the fact that the beach is great! You’ll notice the Eastern-European influences when visiting the bars and restaurants in the area. It’s perfectly normal to start your day ordering a peppered Horilka with honey and to enjoy caviar for a reasonable price.

How to reach Coney Island?

To visit Coney Island, I’d recommend taking the subway. Subway lines D and N are the quickest and both take you to the stop “Coney Island – Stillwell Avenue”. The Q and F trains take a lot longer.

Eric’s Tip: If you don’t want to stay in one place and prefer seeing much more of the area, I’d suggest you take subway lines N or D to “Coney Island / Stillwell Avenue”. From this point, you can enjoy a nice walk on the boulevard or on beach to the Brighton Beach subway station. Subway lines Q or B will take you back to Manhattan. Don’t forget to taste the local specialty for lunch: Nathan’s hotdog (and fries)!