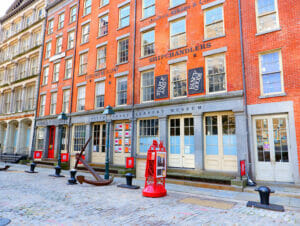 South Street Seaport in New York is a historic neighbourhood in Lower Manhattan. South Street Seaport and the adjacent Pier 17 are located on the East River. On the landward side, the district is surrounded by the Financial District. The area features original 18th and 19th-century buildings, renovated sailboats and the former Fulton Fish Market. However, you can also go to cozy bars, large events and ice skating. Many of the South Street Seaport activities take place at Pier 17.

South Street Seaport is a designated historic district, meaning that it has remained in its original state enough to be of historical significance. Some of Downtown Manhattan’s oldest buildings can be found here, and walking around really feels like you’ve travelled back in time. Combine this area with nearby Stone Street in the Financial District to immerse yourself in the New York of yesteryear. South Street Seaport is also home to the Titanic Memorial, an 18-meter white lighthouse on the corner of Fulton Street and Pearl Street. This memorial was created in memory of the passengers and crew members who died in the boat disaster. 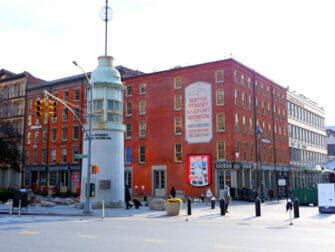 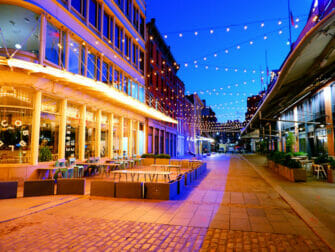 The Titanic Memorial is located at the entrance of the South Street Seaport Museum. In this museum, you will learn everything about the history of this special area. It consists of a few ships, located at Pier 16, a working 19th-century printing house, a gift shop and several exhibitions. All this is devoted entirely to the history and development of the city of New York. There is specific attention to New York’s role as a world port. Admission to the South Street Seaport Museum is included with the New York Sightseeing Flex Pass.

Pier 17 at South Street Seaport has been closed for years as a result of the havoc wreaked by Hurricane Sandy. The pier was recently completely renovated and reopened. Nowadays, the rooftop of the pier is especially a hotspot. In winter, a skating rink called Winterland Rink can be found here and in summer concerts and other events are organized. Various catering establishments are located on the ground floor, which is a nice place to relax with a snack and a drink.

Eric’s Tip: Woke up early because of the jet lag? Then head to one of the wooden benches on the waterfront. From here you have a beautiful view of the sunrise over Brooklyn and the East River. 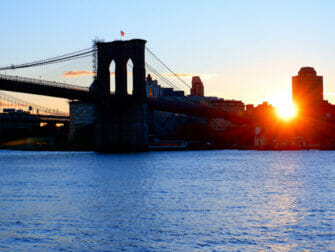 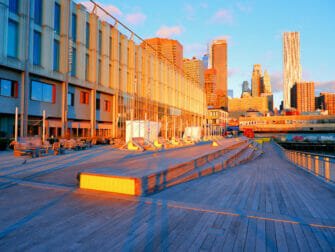 Anyone who visits South Street Seaport will definitely enjoy walking around the old streets. There are also several shops that are worth a visit, such as the atmospheric bookshop McNally Jackson. Those who enjoy browsing local farm produce should also visit Fulton Stall Market. Are you in New York with children? Then you can let them go wild at the beautiful Imagination Playground.

If you can’t get enough of the historic atmosphere, there are several South Street Seaport hotels you can book. Mr C Seaport’s beautiful rooms, great service and of course the cocktail bar make it arguably one of New York’s finest hotels. Other good options include the AC Hotel by Marriott and Hampton Inn Seaport.

Eric’s Tip: I thought the Mr C Seaport hotel was fantastic. The thing which was most memorable during my stay here is the wonderful bed; possibly the best hotel bed I’ve ever slept in. Since I’m such a fan of the little man in the hotel logo, the bath mat from my hotel room might be in my own bathroom currently… 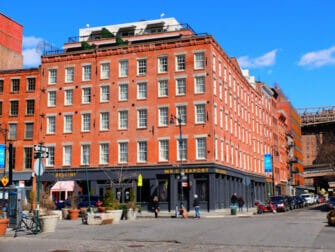 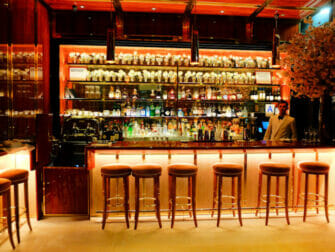