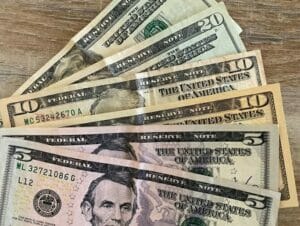 You can bring money to New York but it is just as easy to take out cash in New York. $1 is approximately A$1.45 (updated in January 2020). Banknotes of $1, $5, $10, $20, $50 are common. Notes of $100 are not eagerly accepted. The notes look so similar that tourists often confuse them. Common coins are quarter (25 cents), dime (10 cents) nickel (5 cents) and penny (1 cent). Credit cards are accepted everywhere. In New York (and in the rest of the US) people that use credit cards are more common than those that use cash. In many ways, it is comparable to using a debit card. If your debit card carries a MasterCard/Maestro/Cirrus or Visa/Plus or other similar logos, they will work at ATM’s and you can pay more and more with them in restaurants and stores in New York as well. Do check with your bank. For most credit cards you do not pay a fee every time you use the credit card. So you can order a cup of coffee without a problem. I do not advise you to travel to New York without a credit card. Withdrawing cash from an ATM machine might cost you an extra fee ($1 to $3). Note that you might have to authorise your cards before you travel. Australian bank passes might not be authorised for use in the world, so check with your bank if you are unsure.

Firstly, consider how much cash you will need for your first few hours in New York. When you arrive, you may want to take a taxi into the city. This can cost between $75 and $115. It is unnecessary, and often costly, to exchange Australian dollars for U.S. dollars at your bank in Australia. Exchange about A$180 (about $130) if you don’t need more right away. It’s always handy to have some cash on you.

Upon your arrival in New York, you can withdraw money at an ATM (cash) machine. Keep in mind that you’ll most likely pay a transaction fee to your bank in Australia. You also pay a fee to the bank in New York, normally between $1 and $4. You are always asked first if you agree with this fee. When you withdraw $100 and the fee is $3 this will show on your bank account as ‘Withdrawal $103’. So better get a larger amount in one go, so you don’t have to take out cash often.

Remember to always bring your credit card when travelling to New York as it makes things so much easier. You can use it anywhere, in taxis and even at Starbucks. If you bring $10,000 or more to the US you’ll have to declare this when entering the country.

How do I tip in New York?

The salaries of waitresses and porters in New York are very low. Sometimes not more than A$6.50 per hour. Tipping in New York is therefore customary. Most people tip at least 15% and 20% is common. If you ordering a drink at the bar, $1 per drink is enough. In the taxi, you tip 10-15% with a minimum of $1. Some restaurants include tip (gratuity) on the receipt. You do not need to give extra tip. This often happens in restaurants around Times Square and for groups of six or more people seated at one table.